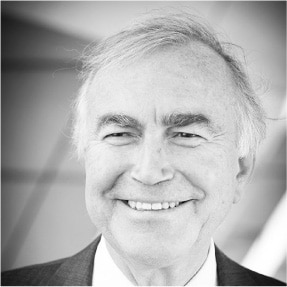 He received his initial training in Lyon with Albert TRILLAT and being a former pupil of Henri DEJOUR, it was quite natural that in 1988 he devoted his activity on knee surgery. He was the director in Lyon of one the most famous school in Knee Surgery in the world between 1994 and 2017. His name is worldwide recognized.
He was nominated professor at the University of Lyon in 1994, and head of the department of orthopaedics surgery.
His main activity is clinical. He used to treat an equal number of sports lesions and degenerative pathologies of the knee during his Lyon career. The many publications, books, CD-Roms reflect this clinical research activity. For his work on the results after meniscectomy, he received the “John Joyce Award” by the International Arthroscopy Association in 1989. Recelty he participated to many international webinars.
In 1995, he participated in the ESSKA-AOSSM “Traveling Fellowship”.

As a professor, he was responsible for four academic national formations in France during 23 years.

He is member of several medical societies and an active participant in the SOFCOT, ESSKA, and he served EFORT as chair of the traveling fellowships during 10 years, and now as General Secretary of EFORT Foundation. He was President of EFORT for the period 06-2019 to 06-2020 and CoPresident of the 2021 Virtual Hybrid EFORT congress. He served ISAKOS as President (2015-2017). He hosted the ISAKOS congress in Lyon on June 2015.

In 2013 he was the President‘guest of the Herodicus society as godfather and invited professor in Hong Kong University, in Columbus University (Ohio) and Kobe University (Japan). He published about 600 articles in peer review (about 200 in PubMed) or books. He is honorary member of prestigious Societies as the Peruvian Society, the German Society ; the Portuguese Society, the Chilean Society. He was recently (2021) elected as SLARD Honorary Member, ISAKOS Honorary Member and in 2022 EFORT Honorary Member.
Among the numerous prices he won with his colleagues note JOHN J. JOYCE III AWARD 1989 (ISK Rome), SECOND PRICE OF EUROPEAN SOCIETY OF KNEE AND ARTHROSCOPY 1990, TROPHEE DE LA So.F.C.O. T. (2000), LIFETIME ACHIEVEMENT for his contribution in patellofemoral pathology by the Patello femoral Foundation in 2017
AWARD OF THE SBOT (Brazil 2019), Price of the best presentation (SOFCOT congress 2019), PRIX JACQUES DUPARC (EFORT virtual congress 2021), HUGHSTON AWARD 2021, AJSM/ AOSSM.
He used to work as consultant in orthopaedics surgeon in Abu Dhabi from 2015 to 2020 (about 50 visits). He has still a valid medical licence to practice in AD.
He gave 1226 presentations in more than 350 international and 150 national congresses.

Professor of the University Lyon 1 in Orthopedic and Traumatology surgery since 1.09.1994, 1st grade since 2007, Exceptional Class since 2014.
He retired in 2017 from the Lyon University.